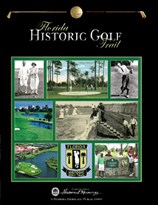 In this section learn more about the history of the course and its hometown, see a selection of historic and current images of the course, learn about what the course is like today, and discover nearby historic sites.

The Naples Beach Hotel & Golf Club is located in the City of Naples in Lee County. Prior to the construction of the current golf course, the only available golf in Naples was a 9-hole municipal course with sand greens that doubled as the airport. Golfers used Third Street and Fifth Avenue as fairways.

In 1930, Allen R. Joslin of Cincinnati purchased 200 acres of beach front property - from the Gulf of Mexico to Tamiami Trail - to build a resort community. His first projects were the construction of an 18-hole championship golf course, a club house and a bathing pavilion.

Joslin hired T. E. Fredericks, who had worked for renowned golf course architect Donald Ross, to be in charge of the new project. Mr. Fredericks had previously assisted Ross in the development of Whitfield Estates (now known as Sara Bay Country Club) in Sarasota. Bermuda grass, cut from the nearby orange groves, was used on the fairways. The course opened in 1931, along with the clubhouse. In 1946, the Watkins family purchased the hotel and golf course, and continue to own and operate them today.

Early in 2016, the golf course underwent a major redesign. Acclaimed course designer Jack Nicklaus, who has a historical tie to the resort (see the “Local Knowledge” section) and golf course architect John Sanford collaborated to redesign the entire golf course. Completed in November 2016, the major $9 million Jack Nicklaus redesign of the course was part of more than $50 million in impressive renovations and enhancements at the resort over the last few years.

“I think those who have played The Naples Beach Hotel & Golf Club before are in for a pleasant surprise,” Nicklaus said. “I believe the golf course has been transformed into a fun, exciting, aesthetically pleasing layout, largely due to hard work of John Sanford and our own David Savic. I think the end product is something people will enjoy and have fun with in the Naples area for many years to come.”

Naples Golf Course and New Clubhouse Soon to be Opened The Naples Beach Hotel & Golf Club includes an 18-hole, par-71 golf course featuring five tees ranging from 4,800 yards to over 6,900 yards, and plays ‘firm and fast’ with gently contoured greens, which challenges golfers of all skill levels. The course is fun, absolutely beautiful and is open to the public. The golf course is among Golf Digest’s "Top 50 Women Friendly Golf Courses.”

The resort course’s signature hole is No. 16, a medium length par 3. The green is a peninsula with water in front, on the right and behind the green. It’s not long, but requires accuracy to hit the green. Golfing legend Jack Nicklaus has a deep historical tie to the Naples Beach Hotel and Golf Club. In 1951, 11-year-old Jack was on a family vacation in Naples, and had only been playing golf for one year. Playing with his dad, Jack broke 40 for the first time for nine holes - shooting a 37 on the resort course.

In 2016, while redesigning the golf course Jack said, “Being back at The Naples Beach Hotel and Golf Club is like a walk down memory lane for me,” Nicklaus said. “Returning to the same course where I broke 40, with my father by my side, brings back a lot of very special and very fond memories.”

Description of 9 Holes from a 1950s Scorecard

Swamp Buggy Races - Collier County's early development in the 1930s and 1940s was highlighted by the emergence of strange looking vehicles featuring large wheels with deep tread tires and a raised chassis.

The first buggies were born out of necessity, as a way to penetrate the vast, boggy mire. These “Swamp Buggies” were used for any excursion, from Sunday afternoon outings with the family to hunting trips into the Everglades and Big Cypress Swamp. On November 12, 1949, the first official Swamp Buggy Day Parade and Celebration was held in Naples.

Today, Florida Sports Park is the home of the world famous Swamp Buggy races held throughout the year. Located on Florida’s Paradise Coast just 12 miles from downtown Naples, the Florida Sports Park provides affordable entertainment to all in Southwest Florida. The Park has thrived for over 65 years on the historic sport of Swamp Buggy Racing, which began in 1948 as an event to help raise awareness for the City of Naples and Collier County. Visit Florida Sports Park for more details.